Vocaloid Wiki
Register
Don't have an account?
Sign In
Advertisement
in: Converting to new layout, Error/External/YouTube, Producer,
and 13 more

CircusP (サーカス), formerly known as DoofusP (デュファスＰ), CheezItsAreYummy, and (matt9five) debuted August 2009. He is a Western producer, illustrator, and UTAU voice provider of Aido Ishiame and Genne Setto, and creator of Chii Feirune. Some of his original works have appeared on Weekly VOCALOID Ranking. He has also created a few UTAU voicebanks.

He took first place in the HATSUNE MIKU EXPO SONG CONTEST in 2015 with his song "Ten Thousand Stars". 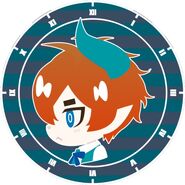 On May 4, 2011, CircusP deleted many of his YouTube videos and later closed his YouTube and deviantART accounts. These sudden actions were due to the use of POCALOID for these songs, and he wanted a hiatus for maturity. CircusP eventually reactivated his deviantART account, made a new YouTube account with a humorous username, and is currently uploading videos using legal software.