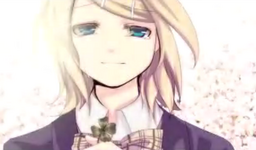 Clover (クローバー) is a trilogy of songs by innisfree. It tells a story about two friends, represented by the singers, who went their separate ways to reach their own dreams, with the end of the series having the two friends reunite.

Acording to her blog,[1] innisfree hadn't planned on making a series when she was working on "Clover". However, due to the song's unexpected popularity, she created "Daisy" as an answer song.

After the answer song was uploaded, innisfree and snowy* decided to close the duology with an epilogue, which became "Sakura".