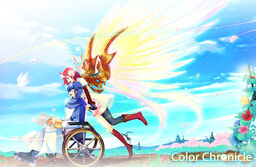 After lots of struggles after the events of Red Reflection, the Guardian and the Princess have finally been able to find their happiness, not caring about their handicaps. The Princess tells the guardian that it was his love for her that gave her strength to press on in the times she were alone and she doesn't care how horrible that time was, since they're together now. With the desert wasteland transformed into a flourish paradise, they vow to never separate again.

This song was released on fake or fate? before recieving it's own PV. It has also been featured on Kono Hana Beauty.

Retrieved from "https://vocaloid.fandom.com/wiki/Color_Chronicle?oldid=1091080"
Community content is available under CC-BY-SA unless otherwise noted.