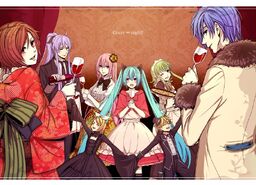 "Crazy ∞ nighT" is an original song by teamOS and is one of their most notable songs. It was uploaded to YouTube on January 20, 2015. This is the 2nd song in the Night ∞ Series. It is sung from the point of view of the mansion's inhabitants (Len, Rin, GUMI, Gackpo, Luka, MEIKO, and KAITO).

The song starts with a flashback scene of the end of Bad ∞ End ∞ Night. There's applause from an invisible audience and then the curtain rises to reveal the 8 characters of the play. When the title appears there's a subtitle of The Lost Libretto and the figures on the clock are reversed.

The Village Girl walks down a path of spotlight. Knocking on the door, the Butler and Maid greet her. The hosts realize she must be lost. Since it was dark outside, everybody decide that, until sunrise, the mansion shall welcome her.

Then the curtains rise as the Crazy nighT party begins and excitement swells. The Village Girl (Miku) sings a little tune as moths flock around a light. Meanwhile, the Butler and Maid realize the grandfather clock's stopped at three minutes until midnight. The Dolls and Daughter point out that the Village Girl is missing as well, as the video shows the descending staircase from Bad ∞ End ∞ Night when the girl ran off in search of the "Happy EnD".

Suddenly, the Dolls realize that the next page was torn from the story. The inhabitants search desperately, but quickly realize it's nowhere to be found. Everyone is worried as they search for the "cause" that changed the night's course, as there is no way to progress if the next page is missing. In fear, the inhabitants discuss the possible causes for the incident, but even as time passes, they are unable to find the page, worrying more and more.

They begin to about what might have been on the stolen page, whether it held an undesirable scene or the identity of the culprit, and all thoughts began to point towards the Village Girl as the potential suspect.

At this point, the Village Girl overlaps with a line from Bad ∞ End ∞ Night saying "I found it", referring to the key to the "Happy End". Then, the inhabitants deaths are shown, as for this Crazy ∞ nighT (play), one must "use the key, and let the excitement swell ever higher!" (the deaths of the household being the "excitement"). A line on the performance repeats from an earlier part of the song: "not thinking about it, just being a fool".

The pages of the play are written again as the Villager destroys everything again (as before in Bad ∞ End ∞ Night). Then, the house's inhabitants reveal that if she wants to see the True EnD, she must make things even more hectic. The Village Girl turns desperate and begs for the true Crazy nighT, believing that surely could not be "True EnD". The curtains lower as the Villager continues to plea for the play not to end yet, but since time has run out, she will be able to search for it on another night.

The very last part is sung by the same unknown voice at the end of Bad ∞ End ∞ Night as the Village Girl is seen standing lost with the letter again as in the start of the previous video.

This has entered the Hall of Legend. It is featured in the albums Vocaloconnection, EndlessroLL, and VOCALOID chouBEST -impacts-.

Retrieved from "https://vocaloid.fandom.com/wiki/Crazy_∞_nighT?oldid=1107922"
Community content is available under CC-BY-SA unless otherwise noted.