Vocaloid Wiki
Register
Don't have an account?
Sign In
Advertisement
in: Converting to new layout, Producer, English producer,
and 8 more

Cien Miller, also known as Cien M, Crusher, Omega Destroyer Dictator Crusher, and Bunny Lord, and formerly known as Crusher-P,[1] debuted in August 2010. She is an American song-writer, singer, producer, and illustrator. In the VOCALOID community, she was well-known for her horror-themed works. Her current songs are emotionally driven, thus explaining why she doesn't upload songs often.

She first gained popularity with the song "Rugrats Theory" but is most well known for the hit song "ECHO".

She is the voice provider for UTAU (turned DeepVocal) Watase Maki.

On October 22nd, 2021, Crusher revealed that she and Caja-P got married. 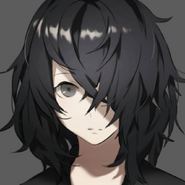