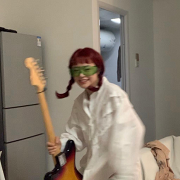 CuSummer, also known as Cu Xia (Cu夏; Cu Xià) and Xia Tongzi (夏铜子; Xià Tóngzǐ), is a Chinese VOCALOID producer who is part of the two-person Chinese group ChiliChill with Yu H., which was formed in 2020. CuSummer was active as an independent musician no later than 2014. She was born in Tokyo, Japan, though moved to China when she was around 10 years old. The first time she worked with Chinese VOCALOIDs was when she was invited to participate in the official Luo Tianyi album Lost in Tianyi, composing the music and lyrics for the song "Monologue".

As for ChiliChill, "Yè Háng Xīng" was their first collaborative work, but "Xīnsuì Shāojiǔ" was the first upload as under the group's name and it was widely praised upon release, inspiring the two producers to continue working together and upload more works as a group.