DATEKEN is a skilled composer who utilizes the Kagamine Rin/Len voice banks. He had released original music and arrangement CDs, but did not begin creating VOCALOID songs until October 2008. Eventually, he gained popularity with the song "Tsumugi Uta" in February of 2009. Their music varies in genre.

His later work, "Jutenija" earned him the "Legendary Kagamine Master" title on Nico Nico Douga. He also received the title "Legendary RIN Master" for his song "Trick Art", along with several other pieces. 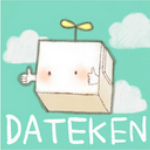