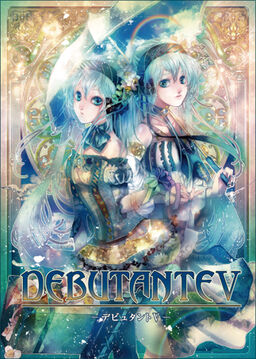 "DEBUTANTE5" (stylized as "DEBUTANTEV") is a compilation album by k-shi studio and the fifth in their "DEBUTANTE" series. It contains 13 tracks, mainly featuring Miku, but also Len, Rin, and Luka. GUMI can be heard in the chorus of track 12. It is also the first "DEBUTANTE" series album to feature Gackpo and the only one in the series to feature Sweet ANN.

Retrieved from "https://vocaloid.fandom.com/wiki/DEBUTANTE5?oldid=998309"
Community content is available under CC-BY-SA unless otherwise noted.