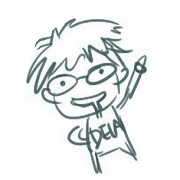 DELA is a Chinese producer who made his debut in January 2013 and specializes in classical, electronic, and pop music. He first gained fame through "Sìjiǎo Yóuxì" for its dark themes and became known to collaborate often with Yu Li, a Chinese lyricist. After taking the college entrance exams, he returned with "Lún Pán" from the Saligia Series.

After the release of the Paranoia Series, his popularity grew. Through the series, he managed to receive over 30,000 favorites on his tracks (a feat that ilem was known to achieve). In January 2017, he became the fifth Chinese VOCALOID producer to reach 100,000 followers.