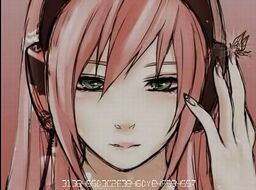 "DYE" is a song featuring Megurine Luka by AVTechNO!. The song deals with wanting to retain individuality ("existence might be thin"), while not overly standing out ("look large"), and being accepted by society ("the color that other people like"). The song contained extended use of the word "dyed" as a metaphor.

The backtrack is dark and warped. Large amounts of synthesizer and the mixing of Luka's voice with the lyrics make it very difficult for even English-speaking listeners to understand the song without the lyrics provided on AVTechNO!'s website. The song is even harder for Japanese listeners to understand, as the translation is not directly placed on the song. Instead, there are strings of katakana encoded in hexadecimal 16 on the video. The letters and numbers must be decoded to the katakana (which yields the pronunciation of the translation), and the katakana must be transliterated to the proper kanji in order to create a textual variant (which must be deduced by context). Even then, some words are omitted in the strings, and a proper English/Japanese translator is required for a Japanese listener to properly understand the song.

In November 2010, AVTechNO! removed a number of his works from NND, wanting to make a "fresh start" on his music. However, this was in a wake of discovering that one of works, "DYE", had apparently been sampled in the song "NEVER x OVER 〜「-」IS YOUR PART〜", sung by Japanese boy group KAT-TUN.[1][2][3]

Fans had assumed that the "real" reason why he removed his videos was because of comments on "DYE" (which was first uploaded in February 2010, while KAT-TUN's song was released on November 17, 2010) about how the song was very similar to "NEVER x OVER". His removal of his videos enraged his fans, who began attacking and blaming KAT-TUN.

AVTechNO! did not know about the plagiarism until the fans dug it up. But AVTechNO! states his real reason for removing videos was due to stress built up over time, which caused him to do it on impulse. It had nothing to do with any commercial contracts he had received, nor about the KAT-TUN fiasco. He made a blog regarding his action soon after.[4] He did not blame KAT-TUN for the act of plagiarizing at the time.

Even after all things had been clarified, fans were still attacking and harassing KAT-TUN and their fanbase for such an act. A friend of AVTechNO! asked his fans to stop pointing fingers until the matter was resolved. A month later, the composer responsible admitted the plagiarism and made an apology through KAT-TUN's management.[5] The matter has now been resolved.

NOTICE: These are the official decoded English lyrics.

To what color am I dyed?
The size of the dyed thing changes because of the difference of the dyed color.
I can grow up if it dyes to good people color.
I want to dye me to such a color.
To what color am I dyed?
The color to be dyed changes under the influence of the private life.
I degenerate if it dyes to villain color.
The color for which I hope is a color with high brightness.
I want to become beautiful mind.
I want to become it.

I obtain the conscience.
And, becomes a luminous color.
There are a lot of black and white in the private life.
My color shines by "Affection" and "Esteem" and "Kindness" and "Looking after" and "Nursing" and "Protection" and "Consideration" and "Respect" and "Solicitude" and "Encouragement" and "Friendship", etc.
I want to choose color that is brighter than the dark color.
If the surrounding is a dark color, I look large.
If the surrounding is a luminous color, my existence might be thin.

The luminous color improves the environment.
The luminous color shines on the dark.
However, the luminous color shines only in a dark place.
Still, I do not care.
My existence disappears if it winks out.
I can become energetic by shining on surroundings.
When I become tired and do not shine.
The source of "Vigour" can be gotten from "Good man color".
The color for which other people hope to me.
It is different from the color for which I hope.
However, if it is an earth friendly color, I like the "Color that other people like".
A dark color in the interior of the spirit is also as the case may be necessary.
Both necessary dark colors and bright colors.
I want to dye me moderately.

It is possible to change greatly in "Thing that becomes a luminous color from a dark color" even if my existence is small.
Now will grow in the future even if it is small.

To what color am I dyed?
The size of the dyed thing changes because of the difference of the dyed color.
I can grow up if it dyes to good people color.
I want to dye me to such a color.
To what color am I dyed?
The color to be dyed changes under the influence of the private life.
I degenerate if it dyes to villain color.
The color for which I hope is a color with high brightness.

Retrieved from "https://vocaloid.fandom.com/wiki/DYE?oldid=999497"
Community content is available under CC-BY-SA unless otherwise noted.