"Dear cocoa girls" is a song by Kosaki Satoru featuring Hatsune Miku, commissioned by SEGA for the Project DIVA series. To celebrate the start of summer, Miku decides to go to a hotel where in order to try and suntan her skin into "ice cocoa" while in her bathing suit, as well as also kicking back and enjoying the pleasures of summer.

Miku's Cheer Version of the Song 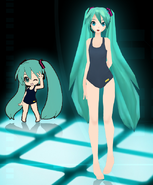 Retrieved from "https://vocaloid.fandom.com/wiki/Dear_cocoa_girls?oldid=976522"
Community content is available under CC-BY-SA unless otherwise noted.