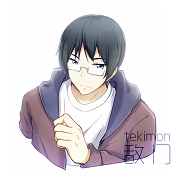 Demon (Simplified: 敌门; Traditional: 敵門"; Pinyin: Dímén), also known as demon_orz, is a Chinese VOCALOID producer who made his debut in August 2010. He specializes in electropop music. His song, "Pick Me Up", was used as the theme song of the MIKU WITH YOU 2018 concert. Aside from "Pick Me Up", "Ài·Mílàn" is another one of his most notable works.

Retrieved from "https://vocaloid.fandom.com/wiki/Demon?oldid=1050790"
Community content is available under CC-BY-SA unless otherwise noted.