A Derivative is a character based on existing ones and can be officially acknowledged.

The term "Derivative" is sometimes difficult to explain and conceptualize. The overseas often call such characters "fan mades" or "fan made characters", but refer to them as different characters in their own right. However, in the Japanese fandom, the character is often considered a variation of the original (for example, perceiving Yowane Haku as Hatsune Miku with a bad singing voice). Therefore there is often disparity between fandoms as to how 'Derivatives' are treated.

The explanation is explained as simply the reason is owed to users doing things such making their own "Miku" while attaching the name "Hatsune Miku" to it. Their own "Miku" is not considered the same as another "Miku". The result is even "Hatsune Miku" herself is open to interpretations and each song's "Miku" is not the same as the next song's "Miku". The result is a large number of "Miku" characters but few are actually representing "Hatsune Miku" herself.[1]

This also means official derivatives like "Racing Miku" or "Snow Miku" can also be considered a variation of Hatsune Miku and at the same time not Hatsune Miku herself. This way, derivative versions of a character can exist side by side in any promotional media base medium with the original character as two different entities to each other, rather than just alternate outfits.

Crypton Future Media is the most known out of the studios for adopting official derivatives into their merchandise. Derivatives are therefore welcome and often developed as a person's interpretation of the Vocaloid they are working with. Many are used by Producers as a form of self-promotion and are taken into account for the number of such designs and appearances in Vocaloid media. If the song is used officially by Crypton Future Media, the Producer's derivative design is also used in the song alongside it. Crypton Future Media consider them a form of Producer creativity and have adopted the most famous ones into their official character promotions.

However, the sheer number of derivatives that have been produced, particularly in the early 2007-2009 period, have resulted in common generic Vocaloid design traits being acknowledged. 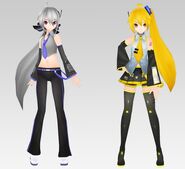 Haku and Neru are examples fanmade characters based on Hatsune Miku.

Sakine Meiko is a fanmade derivative based on MEIKO.

ZeeU is a derivative based on and is the official gender bend of SeeU.

Another type of fan-made derivative is the "gender bend", here is "KAIKO", a gender bend of KAITO.

"Princess" personality from World is Mine is a derivative of Miku herself.

To the fandom derivatives that appear to be 'funny looking characters', are usually called Mascots of the Vocaloid they're derived from. Both of the mentioned are seen in the PSP game, Hatsune Miku ~Project Diva~ as available background skins, the sequels feature them as accessories.