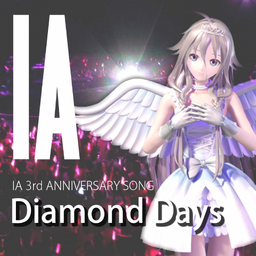 "Diamond Days" is an original song by out of survice. The concert footage was uploaded by the official 1st PLACE account, first on niconico, then later to YouTube on September 29, 2015. This song was made for IA's 3rd anniversary.

This song is featured in a single of the same name. It's also featured in the album IA/04 -STAR-.

Retrieved from "https://vocaloid.fandom.com/wiki/Diamond_Days?oldid=1091570"
Community content is available under CC-BY-SA unless otherwise noted.