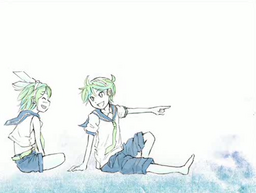 The short version (Two minutes length) was uploaded on May 20 and the full version came two months after the short version's upload. It then became one of Lamune-P's biggest hits and his first work to have achieved 100,000 views and enter the Nico Nico Hall of Fame on July 25, 2009.

The song tells about summer; Lamune-P stated that "Dog Days" are the hottest days in summer. The name comes from Sirius (also called Dog Star) as he (the sun) was responsible for the hot weather, while "afternoon," to put it bluntly, is when the day is at the hottest as well. Those two combined, the title means "the hottest days of summer in the hottest time in the day."

This song was in the Supplement Time's visual novel Rin ga Utau, Mirai no Neiro; and this is the song where Lamune-P earned his P name (part of the lyrics said "Lamune")

Retrieved from "https://vocaloid.fandom.com/wiki/Dog_Day_Afternoon?oldid=1194974"
Community content is available under CC-BY-SA unless otherwise noted.