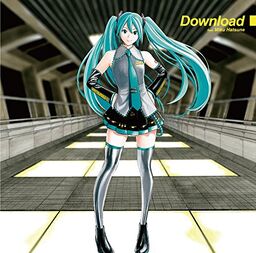 "Download feat. 初音ミク" is a compilation album by Warner Music Japan. It has 16 tracks, written by various producers, featuring previous favorites, new arrangements and newly written songs. The theme song is called "Connecting", it was written by halyosy and features all of Crypton's VOCALOIDs.

The Limited Edition version of the album comes with a memorial coin, digipack packaging, and an illustration booklet.