"drop pop candy" is an original song by Giga-P. It is about unrequited love. An alternate version, featuring Giga-P and Reol, was uploaded at the same time.

This song was featured in the album No title+ 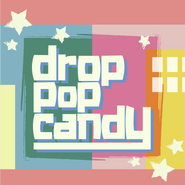