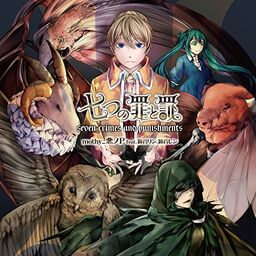 Carlos Marlon (KAITO) was born with a disease that has kept him weak through out his whole life and he drinks a drug made by a shaman to keep himself alive. When he becomes fifteen he becomes engaged to the Daughter of Muzuri Conchita, Banica (MEIKO). After spending some time together, he develops a crush on his fiance. However his family becomes so disgusted by Banica's eating habits at the engagement party that they end his engagement to her.

When he grows up, he hears a rumor about Banica becoming The Evil Food Eater. Worried, he goes undercover as a cook to watch over her and meets up with her, now an adult woman. Smitten by her beauty, he falls for his former fiance once again. After a while, satisfying Banica tastes becomes too much for him and he tries to flee from her, but gets caught each time. Carlos laments that if he had accepted Banica back then, she might not have turned out like she did and tries to poison Banica and himself, believing it's the only way they can be happy together. The poison doesn't work on her, but Carlos dies and becomes devoured by Banica, but he doesn't complain, as he can now be with her forever.

This song was released as an answer song to Evil Food Eater Conchita as part of the Seven Crimes and Punishments album.

Retrieved from "https://vocaloid.fandom.com/wiki/Drug_Of_Gold?oldid=955036"
Community content is available under CC-BY-SA unless otherwise noted.