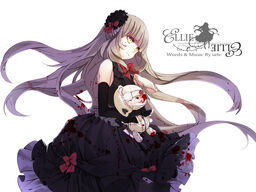 “If that women was dead, you and I could both be happy...”
—Author's comment, translated by OccasionalSubs

seleP's first song with MAYU and the predecessor for Elsa-Maria.

MAYU plays the role of the yandere Ellie who falls in love with a man who falls in love with someone else. The man engage in a relationship with another a woman named Elsa-Maria; however, he begins an affair with Ellie. After finding out the couple is expecting a child, Ellie decides that the only way she can truly gain all of the man's affections is if she kills Elsa Maria. However, to the confusion of Ellie, the man commits suicide by jumping off a ledge. Out of misplaced blame, she confronts Elsa-Maria and murders her. It is heavily implied that Ellie commits suicide in the end.

The song alternates between the present and the past, switching from her mentions of blood to the reasons of her actions. The PV also displays her increasing agitation, with her starting out the song looking withdrawn and distraught and ending the PV with her covered in blood.

This song is featured on YANDELOID CONCEPTION.

Retrieved from "https://vocaloid.fandom.com/wiki/ELLIE?oldid=1047904"
Community content is available under CC-BY-SA unless otherwise noted.