eVocaloid™ is an integrated or "embedded" version of the synthesizer, designed to be part of the NSX-1 chip, a product made by Yamaha.

eVocaloid works by making use of a LSI sound generator called the "NSX-1" source chip which can generate 30 sounds of midi.

The NSX-1 can be placed in several devices, like instruments and mobile devices, allowing a variety of usages.[1] The advantage of this over the software version of VOCALOID is that vocals can be made to sing in real time. It contains a version of the VOCALOID API, though details are unknown.

The version used in the demonstration of the chip is based on the feminine voice of VY1, the interface of which is called "eVY1" (a Japanese voice); the eVocaloid software is embedded on the "eVY1 SHIELD" product.[2] It uses the programming script of Java.[3] 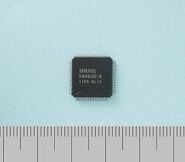 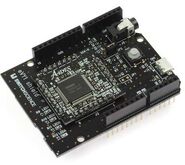