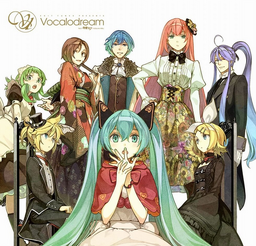 "Vocalodream" is a compilation album by EXIT TUNES and is the 9th in their "Vocalo" series. It consist of some notable tracks such as Jin's "Kagerou Days", natsuP's "Fate: Rebirth", Kurousa-P's "Senbonzakura" and "Akahitoha", and more. Several new tracks uploaded for the compilation include Hitoshizuku-P x Yama△'s "Bad ∞ End ∞ Night", which inspired the cover and is also the first song of the Night ∞ Series, and Fuwari-P's "Yume no Katachi", which is featured as a bonus track. 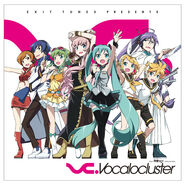 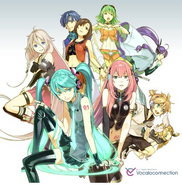 Each copy of the album will feature the following limited quantity items, all illustrated by Hidari.