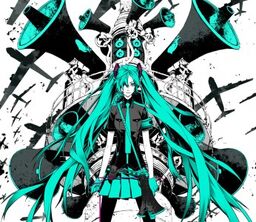 "Eager Love Revenge" is a special Tribute Album released by the circle m.m.m. It features only one song, "Koi wa Sensou", and is remixed by multiple artists, including ryo himself.

All lyrics written by ryo.

Retrieved from "https://vocaloid.fandom.com/wiki/Eager_Love_Revenge?oldid=862356"
Community content is available under CC-BY-SA unless otherwise noted.