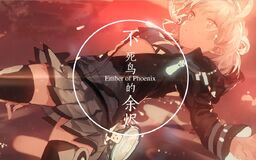 "Ember of Phoenix" is an original Luo Tianyi song.

The song's themes share similar traits of the Phoenix. Despite the energetic sound, it has a powerful, self-forgetting tone. This is evident in "Give up your memories. Give up the past. Give up yourself.", "Give up the unknown horror that's concealed in the heart." and "Live with the next unknown second and then be reborn from the ashes" ("放弃回忆放弃过去放弃自己", 放弃掉不知名的恐惧藏在心底" and "活在不为人知的下一秒 重生灰烬").

This song was featured in the Píngxíng Sì Jiè 2 album.

Retrieved from "https://vocaloid.fandom.com/wiki/Ember_of_Phoenix?oldid=953395"
Community content is available under CC-BY-SA unless otherwise noted.