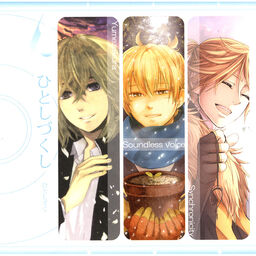 Years after the events of soundless voice and proof of life, Len remembers the days he used to spent with Rin, how she gave him happiness, and how she smiled for him. While he's happy he was able to spend the time he had with her, he's sad he can't have a future with her.

In lonely nights, Len remembered Rin's helpless voice, crying. After singing Rin's song "I do not want to sing a sad song" (the lyrics from "proof of life"), he remembered her voice, it was still there. The song ends with him saying that he will always love Rin.

This song is featured in the albums EndlessroLL, Hitoshizukushi and STORIA. The MV of this song is uploaded commemorating 10 years of soundless voice.

Retrieved from "https://vocaloid.fandom.com/wiki/Endless_wedge?oldid=1107816"
Community content is available under CC-BY-SA unless otherwise noted.