EndlessroLL is Yamashizuku's first major album released on December 19, 2012. It consists of 18 tracks, several of which are remastered, and also includes several straps and a mousepad designed and illustrated by Suzunosuke. The album ranked number 14 in the Oricon weekly sales chart its first week of sales, and appeared a total of 5 times in the ranking.

The first crossfade can be found here, and the second crossfade here. 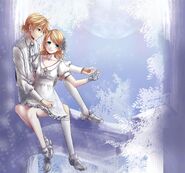