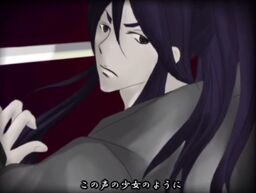 Episode.0 was an entry for GACKT's song competition and was the winner of the grand prize.

The song tells the story of a samurai who was bloodthirsty and wanted nothing but to fight. As the song progresses, the samurai is impaled by a katana and starts to die. While laying for dead, he remembers his hometown and a young girl singing. The singing girl makes him realize that nothing is more important than tranquility. With his final moments, he wishes that not only if he could be reborn and sing but to also take the burdens of other people and have them die with him.

Retrieved from "https://vocaloid.fandom.com/wiki/Episode.0?oldid=972047"
Community content is available under CC-BY-SA unless otherwise noted.