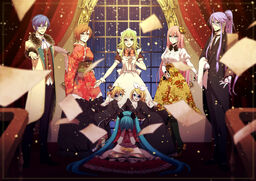 "EveR ∞ LastinG ∞ NighT" is an original song by teamOS and is one of their most notable songs. It was uploaded to YouTube on February 4, 2015. This is the 4th and last song in the Night ∞ Series. The first difference between this and the other songs is that usually the Villager sings the intro. However, all the other members of the play as well as the Mastermind sing this one. The song itself is split into halves, the first being the story of how these recurring plays began, and the second taking place inside of the Crazy ∞ Night's world.

In the intro, it is revealed the seven mansion inhabitants are actors in a play, hence the Kanji for "Role" (役) behind each of their names, which separates them from their characters. The cast is conformed by the Boy Doll (Len), the Girl Doll (Rin), the Maid (GUMI), the Butler (Gackpo), the Daughter (Luka), the Lady of the House (MEIKO), and the Head of the House (KAITO). The Villager (Miku) is shown falling and screaming from the spotlight right before the title sequence.

In the real world, the play of Crazy ∞ Night has begun. An audience watches and now the actors are in character, no longer having the "role" in front of their names. The mansion's inhabitants ponder on how strange a night it is. With a red moon and a storm brewing, something is bound to happen. They start on making conjectures about who will come to the house, and minutes later the Villager knocks on the door. After they decide she will stay for the night, the Mansion's inhabitants entertain The Villager until day comes and the storm outside passes. She is soon enchanted by the Mansion inhabitants, and begins to dance spinning on stage. But she loses control of herself and breaks the grandfather clock's glass, and a clock hand falls to the floor.

The scene changes to the Villager waking up in the Mansion. She encounters The Doll Twins, and realizes they are now real living dolls. It seems that in this world, the "lies" of the play have become "real". The night will continue forever as the result of her mistake, and everybody are trapped in their roles, without being able to remember what they were. The Villager is the only one that realizes the world is just a fake.

Pondering about how will she save everybody, the Villager finds a letter in her pocket. She realizes it is the EndrolL, and decides to show it to the others. But the inhabitants were also making a plan to get out of the time loop. It seems they are now out of their character roles, well aware of what happens in the play. While the Villager hears their conversation behind the door, they decide to "bring the real girl (Miku) from the grave and switch her with the fake one", hiding this from the Villager in order to perform the most magnificent night. But she reveals her presence to the others, and runs away. The Villager, the Lead Role, was betrayed by everything, realizing she was just someone's substitute.

She soon approaches the grandfather clock and breaks the glass, taking the clock hands. The inhabitants fear that another Bad ∞ End ∞ Night is about to occur, but the Villager runs to the coffins instead. After opening one and discovering its content, she slits her wrist and uses her blood to write a message in the letter's blank page: "The Everlasting Night has fading away, here comes a new dawn". The inhabitants reach the coffin room and find the Lead Role holding the knife (the clock hand) in her hands. They run trying to stop her, but the Villager is able to kill herself in the end. Now they have all returned to the unwanted reality.

This has entered the Hall of Legend. It is featured in the albums Vocalospace and Mistletoe ~Kamigami no Yadorigi~.

IMPORTANT NOTE: Chorus refers to everyone except Miku.

Retrieved from "https://vocaloid.fandom.com/wiki/EveR_%E2%88%9E_LastinG_%E2%88%9E_NighT?oldid=1007596"
Community content is available under CC-BY-SA unless otherwise noted.