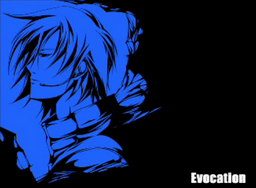 Evocation, featuring KAITO, is Shinjou-P's first original work. It is a rock song, released as a short version; and the full version was never released. The "4"s in the lyrics are equal to the letter "r".

Retrieved from "https://vocaloid.fandom.com/wiki/Evocation?oldid=796583"
Community content is available under CC-BY-SA unless otherwise noted.