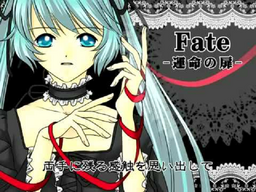 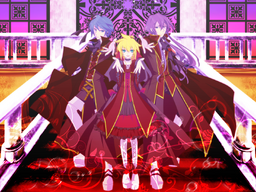 "Fate -Unmei no Tobira-" is an original song by natsuP.

It is sung form the point of view of a woman (Miku) mourning the loss of her loved one (Gackpo). It is implied that she commits suicide to reunite with him in the end.

This song was later rearranged and uploaded by SCL Project, and sung by VanaN'Ice twice. The 2nd version is titled "Fate:Rebirth" and painted as 2 men mourning a woman. That version became arguably more popular than Miku's version and is one of SCL Project's most notable songs. The 3rd version is titled "Fate:Rebirth (2018 LiveVer.)" and was uploaded on the 2nd version's 9th anniversary.

The first 2 versions have entered the Hall of Fame.

Miku's version is featured in the album Seven Color Light.