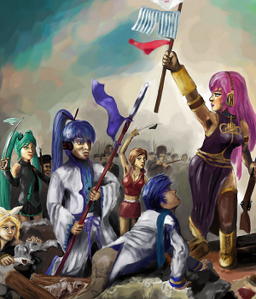 "Fight for Free" is Utakata-P's fourth original VOCALOID song first uploaded on June 2, 2009. It is Utakata-P's most notable work the other being "Hajimete no koi ga tsureta toki". The song is described to have a straight message saying underwear should be taken off as a sign of freedom; making underwear their flags.

Along the way, with the spirit of freedom in hand, Luka later asks everyone else to fight for free, though in doubt at first in the end they hang their underwear up to the skies and joins her.

Retrieved from "https://vocaloid.fandom.com/wiki/Fight_for_Free?oldid=941590"
Community content is available under CC-BY-SA unless otherwise noted.