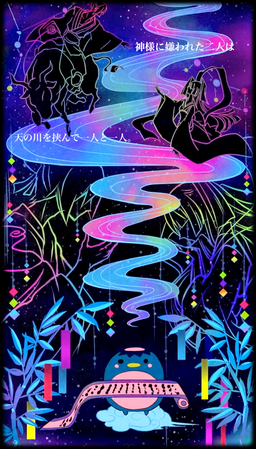 Tanabata-tsume, the Weaver Maid, is the patron deity of weaving in Japan and the subject of an old and beautiful legend. Devoted to her husband, she neglected her work, and was banished across the River of Heaven (the Milky Way). However, once a year, birds form a bridge over the river with their wings so the couple can be reunited for one night - the night when women pray for skill in Japan's marvelous textile traditions.
Tanabata is on July 7 and is a part of Japanese folklore. The day celebrates the legend of Orihime and Hikoboshi (associated with the stars Vega and Altair), two deities that were separated by an entire galaxy for being too in love to do their jobs. Additionally, the Milky Way (Amanogawa) is considered a literal river.

“A couple scorned by the Gods, separated by the Milky Way itself. Only once a year, on the night of Tanabata, were they permitted to meet. But even then, only if the sky was clear. And with the threat of overcast skies, such an occasion was rare indeed. People came to call the Tanabata rain a rain of tears.”

Retrieved from "https://vocaloid.fandom.com/wiki/Fools_Among_the_Stars?oldid=1133991"
Community content is available under CC-BY-SA unless otherwise noted.