Vocaloid Wiki
Register
Don't have an account?
Sign In
Advertisement
in: Pages with reference errors, Fukase, Voicebanks,
and 6 more

Satoshi Fukase reported that he spent 2 weeks in the recording studio recording the sounds for his VOCALOID. He had to record every single sound about 100 times so every possible combination could be used by the band. He later reported he erased the memory of recording it from his mind, however, his bandmate, Saori, described as a "nightmare". Saori sat through the entire 2-week recording session because Satoshi Fukase wanted her there.[1]

On August 4, 2015, it was announced that the lead singer of SEKAI NO OWARI, Satoshi Fukase, would be receiving a voicebank.[2] A design contest was held for him from August 4 to August 31.[3] On September 18, the winner of the design contest was revealed to be mikuma.

On January 8, 2016, four demos for Fukase were released. It was announced that he would receive two Japanese voicebanks: Normal and Soft. In addition, he received an English voicebank, which made him a Japanese and English bilingual VOCALOID. His digital download, physical copy, and starter packs were marked for release on January 28.[4]

Later, information about Fukase's development was revealed. Production of the voicebank began three years prior when Satoshi Fukase's office contacted YAMAHA via letter. The voice was always intended to be bilingual due to SEKAI NO OWARI's tendency to use English in their songs. However, there was only one native English speaker amongst the development staff with experience recording English voicebanks. They continued to create voicebank recordings even while Satoshi Fukase was abroad.[5]

The English voicebank took 3 times longer to record and was done in 6 or 7 sections. At the time, CYBER DIVA was in development and knowledge gained from this vocal impacted the balance of English vocals overall. "Soft" was chosen for Japanese to give a more whisper-like quality to the vocal. The Japanese "normal" draft was powerful in pitch, especially with G#3. A decision was made to not focus on power. The plug-in, "Electronica-Tune", was designed to be a snap-in pitch plug-in and mimics auto-tune, adding vocal effects within VOCALOID itself rather than via the DAW.[6]

In June 2016, a "Creator Pack" based on Fukase was announced. This product contained a physical product called "UR12", a USB powered audio interface device. The package also included the "VOCALOID4 Editor for Cubase", a copy of the DAW software Cubase AI, and the Fukase vocal.[7] The Creator Pack has since been discontinued. 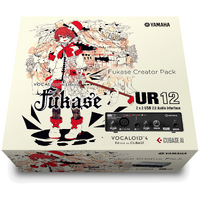