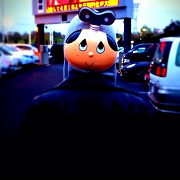 G.K, also known as rest or stay?, hwaken, BANQO., QUERUX, and Hato-p (ハトP), is a Chinese VOCALOID producer who is the director of audio for the Vanguard Sound group. He was described to have profound music production and recording skills, and was noted to specialize in electronic music. He was the former developer of Shanghai HENIAN Information Technology Co. Ltd.'s Luo Tianyi.

Retrieved from "https://vocaloid.fandom.com/wiki/G.K?oldid=960055"
Community content is available under CC-BY-SA unless otherwise noted.