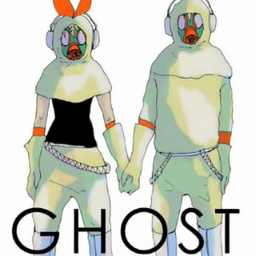 The song is one of Ahirugunsou-P's most notable works, the other being "Uso to Time Machine". The song "GHOST" has invited various derivatives and interpretations due to the song.

The song GHOST was later covered and featured in the Exit Tunes compilation album by the utaite Lon (her version of the song uploaded in Niconico exceeds the views of Ahirugunsou-P's original).

It tells a story of two "ghosts" who can not avoid their fates and suffer a miserable pain. They went through everything together despite the hardships to overcome.

This song is featured in the album, Boku no Mote Kyoku (Toshahi) BEST.

Retrieved from "https://vocaloid.fandom.com/wiki/GHOST/Ahirugunsou-P?oldid=975673"
Community content is available under CC-BY-SA unless otherwise noted.