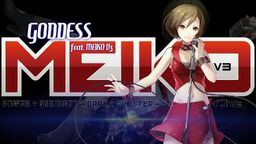 "GODDESS" is the first work by shu-tP with MEIKO V3. This song was originally composed with MEIKO (V1) but MEIKO V3's version was previously published to celebrate the MEIKO V3's release.

The song after received a english version and a arrangement uploaded in Septeber 05, 2014 in collaboration with metragoon and various illustrators for the MEIKO's 10th anniversary. A album with same name was released by KARENT on MEIKO Anniversary'14.

You begin to turn the doorknob slowly,
simply to take a look
Piercing intensely from between the gap
came a dazzling light

As we are starting to connect hand in hand

Retrieved from "https://vocaloid.fandom.com/wiki/GODDESS?oldid=946874"
Community content is available under CC-BY-SA unless otherwise noted.