To see the marketing of their other VOCALOIDs, go to this page.

An iPhone featuring GUMI on its casing has been produced.[2]

Gumi stars in a anime TV short series called Koi Suru Dessan Ningyō, it is named after a song by sasakure.UK of which the short is based on. Masanori Okamoto is responsible for many aspects of this project including the script and filming of the short. If the short is popular a series will follow.[3]

There are several official manga (based on songs sung by GUMI) featuring her. The bi-monthly Vocaloid magazine, Comic@loid, has released some titles, and others have not been released yet. The released titles include Mozaik Role, Kiritorisen, Shiryoku Kensa, Setsuna Trip, Ringo Uri no Utakata Shoujo, and Yowamushi Montblanc. There are currently no plans of officially translating the manga into English, but the fan translation team, Vocalations, are translating most of the titles.

Another manga is "GUMI from Vocaloid" which ran from 2013 to 2014.[4] This particular manga is not based on a specific song, but rather on GUMI's adventures as a VOCALOID.

Another manga which appeared in 2014, which stars Gumi. This features the fictional birth story of "Gumi", who was a girl who becomes a Android and debuts as a idol. The story focuses on her and a mysterious team called "Interface sound Orchestra" (インタネ団). Fellow Vocaloids Camui Gackpo, Lily and Cul, also feature in the manga. The name of the manga is MeguMegu☆Singer Song Fighter (メグメグ☆シンガーソングファイター).[5]

The first of two figurines based on GUMI's art on an EXIT TUNES album are due for release. As of now GUMI also has a Nendoroid that was released by Good Smile company. There are also going to be a few other figurines based on her VOCALOID3 design. 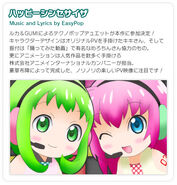 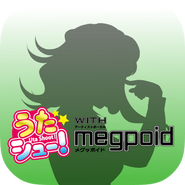 On Dec 11th, 2010, the president of INTERNET Co. announced that Gackpo, GUMI, and Lily would be distributed in Taiwan.[8]

Vol.3 of the VOCALOID-P data series which had only GUMI songs in it was released on March 16, 2012, the same day as Megpoid - Native's release, as part of a promotion of the new updated voicebank.

GUMI made a guest appearance in Project mirai. This was the second time an Internet Co., Ltd VOCALOID has appeared along side Crypton Future Media VOCALOIDs, the first being Camui Gackpo in Maker Hikoushiki Hatsune Mix.

On June 26, 2013, GUMI was revealed to be featured in Project mirai 2 as a guest appearance for her 4th anniversary.[11] After listening to the players responses and demands she was also given her own playable nendoroid character.

GUMI features two 3D models in "AHS キャラミん Studio" as "guest" models for the software. They are of her her Megpoid and V3 Megpoid designs. Yuzuki Yukari and Tohoku Zunko also feature in the software.[12] As part of marketing for this, a event was held where participants could do karaoke to GUMI and Yukari songs. A drink based on both of these VOCALOID were also offered at the event.[13]

In May 2012, a song contest was announced for GUMI, which was hosted by CreoFUGA. Producers entering the contest could use any VOCALOID2 or VOCALOID3 GUMI voicebank. Winning entries would make it into a game made by NAMCO Bandai. The contest began on May 26, 2012 and ended on June 26, 2012. As part of promotion, CreoFUGA offered coupons to buy other Internet co., Ltd Voicebanks before the end of the competition.[14]

Commemorating Lily’s 2nd anniversary and VOCALOID3 GUMI’s 1st anniversary, Avex Management and INTERNET Co., Ltd are holding a music contest, accepting entries in the span of time between August 25, Lily’s release date and October 15, with winners being announced on October 21, VOCALOID3 GUMI’s release date. To enter, the applicant must upload a song made using Lily and/or GUMI to Nico Nico Douga before the deadline, add the tag “LilyGUMI楽曲コンテスト” and lock it. The fine print says that previously uploaded works are eligible, although these songs must all be the original work of the uploader. The grand prize winning song nets 100,000 JPY of prize money and gets added to the upcoming 2013 “LilyxMegpoid Split Album”. Three songs receiving an award of excellence will net 30,000 JPY in prize money. Finally, three special prize winners will be rewarded one copy of Singer Song Writer 9 Professional each.

Another song contest was run, linking with the release of her English vocal.[15]

A contest was held by VocaloTracks in 2013 to create an original song using any of Gumi's voicebank. The were able to sell their songs under a "professional label".[16]

Megpoid was one of 3 voicebanks the robot model HRP-4C was set up to react to,[17] the other two being Hatsune Miku and Crypton's private VOCALOID named CV-4Cβ.[18]

GUMI had a joint promotional effort with Japanese restaurant "Go!Go!Curry". In Oct 2012, a song was also released alongside this called "Can't stop！ゴーゴーカレー".[19]

A promotion to celebrate Gumi's 5th anniversary. It features Gumi as a high school girl and comes with a new song by 40mP called 'Going My Way' with another song soon to come.[20]

GUMI and Gackpo made special appearances in the 2010 new year celebration event known as King Run Anison Red and White.

The songs they covered were;

Their appearance was strictly a one off event.[21][22]

GUMI and Akikoloid-chan appeared in a concert together in Japan dancing on stage. Though other concerts have been done for VOCALOID, this is the first official "3D" concert, previously all concerts had been done with 2D technology.[23] Later merchandise related to the concert was released, including a DVD and CDs of the event.[24]

On November 2, a video-clip about the 3D Concert "VOCALOID x LiveAR" was released.