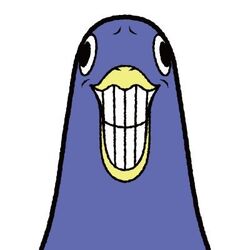 GYARI, also known as Cocoa Cigarette-P (ココアシガレットＰ) or Hagari Hajime (葉狩はじめ), is a producer known for both original songs, covers, and arranges using jazz. He is known for drawing comics, and illustrates the pictures of his videos entirely by himself.

His P-name, Cocoa Cigarette-P, originates from his jazz arrangement of the song 夏影 (Natsukage), in which the PV features Rin having a cocoa cigarette in her mouth.[1]

In his videos, he had VOCALOIDs playing music as if they were in a jazz band. Though the band changed a bit over time it used to consist of:

The most notable example for his band idea is the Vocaloids Are Only series, featuring the VOCALOIDs (mainly Rin, Len, and Yukari) chiming along the non-lexical lyrics. In recent years, he has switched to using VOICEROIDs in his works.

On September 2019, GYARI announced that he founded the group of Virtual YouTubers under the name Vox Monsters Project (shortened to VOMS and stylized as #voms_project), and three members for the group is Amano Pikamee, Hikasa Tomoshika and Jitomi Monoe, all three of them debuted together on March 19th, 2020.