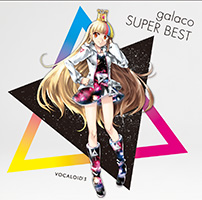 Len and Rin can be heard in the chorus of track 17.

Bundled with the public release of the album is a trial version of galaco NEO and WAV and VSQx files for 12 songs.

Retrieved from "https://vocaloid.fandom.com/wiki/Galaco_SUPER_BEST?oldid=832327"
Community content is available under CC-BY-SA unless otherwise noted.