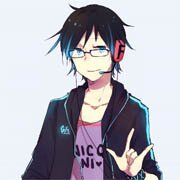 GhostFinal is a Chinese producer who made his debut in August 2012, but had interest in the VOCALOID software since 2009. He specializes in electronic styles of music. "Be Your Own Hero", one of his first original songs featuring Luo Tianyi, became one of his most notable works.

He is currently semi-active.

Retrieved from "https://vocaloid.fandom.com/wiki/GhostFinal?oldid=1101706"
Community content is available under CC-BY-SA unless otherwise noted.