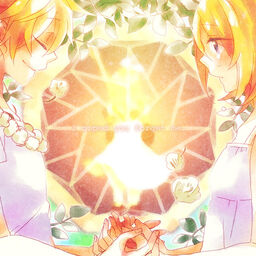 The Girl and Boy Series tells a story about a girl (Rin) and boy (Len). Rin, who wanted to commit suicide, met Len, who was a silent and calm boy. The two eventually became friends. They've changed each other along the way, resulting in Rin not wanting to commit suicide by the end of the series.


Out of all the songs, the first song of the series "Suiside Girl / Silent Boy" (note that Suiside is how MyGOD-P writes the title) is the most notable, with over 50,000 views, and Sunburst and you're Looking for being the second most notable with over 40,000 views.

An 11 minute short PV (the series' medley) illustrated by Suzumi and Madoromi was uploaded on April 12, 2012; a year after the "last" song of the series was uploaded.

The short PV is actually a 52 paged doujinshi entitled "girl meets boy, boy leaves girl" by Suzumi and is available for purchase in Toranoana for 1,200 yen.