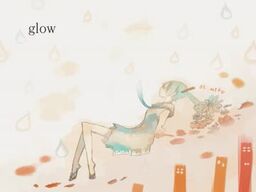 "glow" is a song featuring Hatsune Miku Dark by keeno. It is keeno's first song, and also his first song to enter the Hall of Legend. It peaked the charts at number 1 on July 2, 2010.

The cold rain came pouring down, melting away my blue wounds
There's someone smiling off in the corner of an evening sky that I once knew

I was all grown up before I knew it, and I'd been through enough pain
To know how to tell pretty lies. But even still, it hurts

A red that brings tears of twilight, I wish it would melt the you inside me away

Because my body overflows with scars from you, I can't go on
Please fade away, please erase them. I asked for nothing more
So tell me why you still hold onto me so tight?

Your voice grows distant, a red that seems to swallow you whole
I bet it will just melt you and turn to night

From between clouds being torn apart, my tears overflow
I clung to you tight as you slowly blurred away

An appearance by Miku (with band MKP39) at the "JOIN ALIVE" music festival. She performed Tell Your World, Himitsu Keisatsu, Nijigen Dream Fever, Arifureta Sekai Seifuku, "glow", Hatsune Miku no Gekishou, World is Mine, and ODDS&ENDS.

Retrieved from "https://vocaloid.fandom.com/wiki/Glow/keeno?oldid=1029093"
Community content is available under CC-BY-SA unless otherwise noted.