Goodsmile Racing with Team Ukyo (GSR) is a racing team that currently competes in Super GT as well as a subsidiary of Good Smile Company that was first established in 2010 after Good Smile Company introduced the Hatsune Miku-themed primary sponsor in 2008 as the primary sponsor of Studie GLAD Racing. The team currently fields the #4 Mercedes-AMG GT GT3 driven by Nobuteru Taniguchi and Tatsuya Kataoka in the GT300 class. The company also produces model vehicles and related goods to support the racing team with sponsors.

In 2008, coinciding with BMW's return to the series, Good Smile Company became the primary sponsor of Studie GLAD Racing. Throughout the entirety of the team's history, GSR took part in the GT300 class of the Super GT racing series in a car featuring illustrations of Hatsune Miku.[1] In the 2010 season, after Studie ended their partnership and takes a temporary leave from the championship, Good Smile Company decided to form their own Super GT team. Originally fielding the #9 Porsche with Team COX as their partners, the team returns to BMW machinery the following season after Team COX withdrew from the series and GSR re-entered their partnership with Studie, who rejoins the series. The 2011 season marked their first season with former Formula One driver Ukyo Katayama as team principal and series veteran Nobuteru Taniguchi as one of the team's drivers, a partnership that lasted until this day.

Following their surprise championship title victory, the 2012 season saw the team briefly expanding into a two-car team, fielding both the #0 and the #4, the only time the team would field more than one car in a Super GT season campaign. The 2012 season also marked the first season that Tatsuya Kataoka became Taniguchi's co-driver in GSR. GSR then scaled back into an one-car team the following season, keeping the #0 team and changing its number back to #4 as they had lost the right to use #0 (reserved for champions only) to 2012 GT300 champion Endless Team Taisan.

The next season, Studie and GSR announced that they will split their partnership, with both teams fielding their own cars in the GT300 class starting from the 2014 season. The 2015 season saw further changes to the team with GSR changing from BMW to Mercedes-Benz GT3 cars. The 2017 season saw the team making their first international and non-Super GT appearance, with the team entering the 24 Hours of Spa for the first time in the team's history.

Their second season as their own team in 2011 earned notability as the team become the champions in the GT300 class,[2] a feat the team would repeat in 2014 and 2017. All of their titles were notable for achieving series firsts/lasts: The 2011 title was the first championship title for both of GSR's drivers (Taniguchi and Bamba), BMW, and FIA GT3-spec machinery, the 2014 title is BMW's last Super GT title as of the end of the 2018 season, and the 2017 title was Mercedes' first Super GT title. The team's successes on track, along with the notability of the Hatsune Miku livery has led the team to become one of the most famous and easily recognized teams in the series as well as a perennial fan-favorite among the fans.

The team is currently the second most successful team in the GT300 class with three team championship titles, only behind Team Taisan's seven team championship titles. The team's current drivers, Nobuteru Taniguchi and Tatsuya Kataoka, are among some of the most successful Super GT drivers in history with three driver titles under their name. They are tied for the most driver titles in the GT300 class (Tetsuya Yamano and Morio Nitta also had 3 driver titles) as well as tied for second overall for most driver titles earned in the Super GT series along with five other drivers (Yamano, Nitta, Satoshi Motoyama, Juichi Wakisaka, and Yuji Tachikawa), behind only Masataka Yanagida and Ronnie Quintarelli's four driver titles.

While the team primarily runs the #4 car in the series, the team would run the #0 car during the seasons where the team acts as the defending champion of the GT300 class as per series regulations. GSR also runs the #00 car for endurance races outside of Super GT (such as the Spa 24 Hours).

Hatsune Miku's design has been adapted into a Racing Queen version for each seasons since 2010. The designs are officially acknowledged as "Racing Miku" (レーシングミク) derivative and are based on Miku's attire.

The 2009 derivative is the only version of the Racing Miku derivatives which did not have an official illustration herself, though it was featured in merchandise for that season. The unveiling of the Racing Miku derivatives only became a feature from the 2010 season onwards. All merchandise related to Good Smile Racing featuring Miku prior to the 2010 season, with the exception of the 2009 Racing Miku figurine, features Miku in her normal attire.

The 2008 season remains the only season where other Crypton Future Media VOCALOIDs (Kagamine Rin & Len) are featured on a Good Smile Racing related car.

In 2013, Miku also was featured with racing outfit in the Isle of Man motor cycling race, for this race Team Mirari were sponsored.[3] Miku also recieved a "Sepang" version showing bare toned skin as part of showing good health and promoting the design as "the Angel of summer".[4]

The designer of the 2010 outfit was illustrator redjuice.

The designer of the 2011 outfit was illustrator Yuichi Murakami (村上ゆいち).

The designer of the 2012 outfit was illustrator GAN.

The designer of the 2013 outfit was Shimazaki Mari (島崎麻里).[5][6] The illustrator of the official art was Saitom. Saitom was noted for the amount of illustrations produced for the 2013 season (he produced 1 new illustration for each race) compared to previous illustrators.[7]

For the 2015 Racing Miku, the design was based on a "Princess Knight" complete with a shield and spear-like umbrella. The illustrator was "Taiki" (タイキ), the lead visual design from Square Enix and SEGA's games "Lord of vermilion" and "Rise of Mana". Koyamashigeto once again returned as the art direction and designer for the season. Tsuyoshi Kusano (草野 剛) is in charge of the new machine design. [9]

All but one of the drivers that has competed under the Good Smile Racing banner has been a driver with a Japanese nationality (Jörg Müller of Germany is the sole exception). The team participated in the GT300 class in all of the seasons the team has competed. 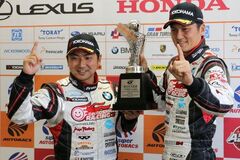 Starting in 2010, the "Racing Queens" (レースクイーン) found around the pit stops pre/post race also wear a manufactured version of the outfit. There have been, however, VOCALOID related outfits worn by the Racing Queens since 2008 with the 2009 'gals' proving quite popular.

The original 2008 Racing Queen trio were nicknamed the "MikuMiku☆gals" (ミクミク☆ギャルズ), this was also used as a nickname for the 2009 Racing Queens trio, the 2008 trio are also referred to as "the plain clothes MikuMiku☆gals". 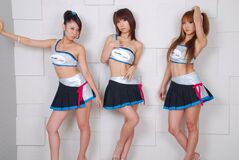 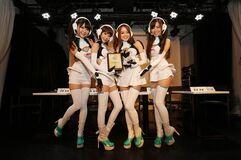 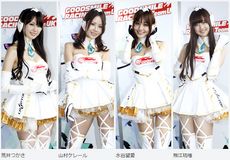 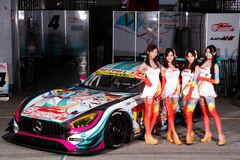 The official Good Smile Racing website is available in Japanese and English. It features Hatsune Miku in the latest Racing Queen uniform. There is information about the current drivers and queens of the season. The 2014 SUPER GT Race Schedule displays all the rounds Team UKYO will participate in.

Official figurines are produced by both Good Smile company and Max Factory, some were made for mass commercial release, while others were exclusives.

In 2014, a pair of matching racing bikes were made for Good Smile Racing.[19]

Stickers are often released either featuring the promotional art, or exclusive.

The racing Miku 2015 vers. receive stickers featuring art that was not present in other promotions.[22]

Sponsorship was extended to motorcycle racing in 2013, and 2014 with TEAM MIRAI.