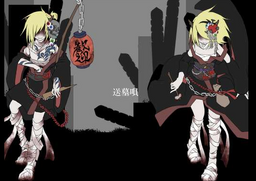 
There are two point of views in the songs (Rin and Len's point of views), they're against each other, though they speak of only one topic; sending "you" to the grave. Although there are some parts where the lyrics are the same, most of the lyrics are against each other. Even so there's only 1 plot in the song. Rin's version uses many metaphors while Len's version is down to earth, "straight forward" with no metaphors what so ever.

This is Mayuko's most notable work; and her first work to have reached Nico Hall of Fame (exceeding 100,000 views). Most of Mayuko's works involves Japanese folk stories; Hakamairi and Riimakaha are no exception.

Retrieved from "https://vocaloid.fandom.com/wiki/Grave-Sending_Song?oldid=843092"
Community content is available under CC-BY-SA unless otherwise noted.