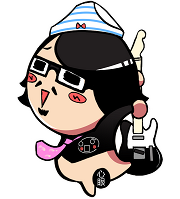 H.K.Kun (H.K.君), also known as Hisa Kwok, is a Chinese producer from Shanghai, China and was born in Shenzhen in 1988. He made his debut in 2009 and is known to work with pop, rock, jazz, and fusion styles of music. He wrote one of Luo Tianyi's demo songs: "A Millennial Menu of China".

He is the founder of the independent label, H.K.Kun Productions, and the band, The H.K.Mushrooms. He was also the general director of bilibili Macro Link from 2013 to 2015 in addition to being the general stage supervisor for the bilibili Micro Link Tour.