The main promotional image for the concert, featuring an animated module and graphics by SEGA and MARZA ANIMATION PLANET, Inc.

The Shanghai Fengyun E-SPORTS Arena, where the concert took place.

The interior of the Shanghai Fengyun E-SPORTS Arena.

The full-scale Hatsune Miku statue, based on KEI's original illustration, shown at the exhibition. 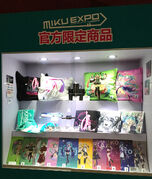 Some of the concert goods shown at the exhibition.

Rin and Len performing the Chinese version of "Tsumugi Uta".

Another image of Rin and Len performing the Chinese version of "Tsumugi Uta".