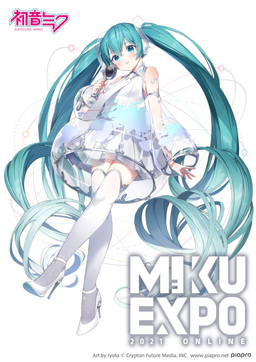 Following the contest's closing date of November 30, 2020, the Grand Prize-winning song was "Thousand Little Voices" by Vault Kid and Flanger Moose, and the runners-up being "Cyber Sweet Bakery" by SCONE and "With This Love" by nostraightanswer, with honorable mentions going to "Bitter to Bitter" by Signal From Afar and "Flying Solo" by Gianloop.[3]

In December 2020, Crypton Future Media opened a costume-designing contest for Hatsune Miku fans around the world, instructing them to, using a pre-drawn template, create an original costume design for Hatsune Miku to wear that matches the theme of and during the performance of the Song Contest's Grand Prize-winning song, "Thousand Little Voices" by Vault Kid and Flanger Moose, with the creator of the winning design receiving an assortment of Hatsune Miku and piapro goods.

Following the contest's closing date of January 4, 2021, a total of 512 designs were submitted. On January 27, Crypton Future Media announced the winning design, which was created by aizumarill from Malaysia.[4]

As part of the concert, three sub-events will be held:

Miku, her colleagues, and the band.