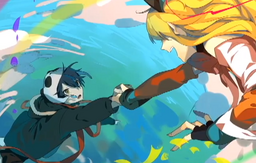 HIGHER ! is an original Korean song by Team.FOIS featuring SeeU. It is the first place winning entry in SeeU's second UGC contest. A hopeful song about never giving up, it holds an underdog theme common in many songs in the contest's Original Song category.

HIGHER ! was voted as the grand prize winner, and was featured in SeeU's concert, The first or the last. The song was featured alongside the second and third place winners of the song competition, 울지 몰라 (Ulji Molla), and 침 (Chim).

In video, "NEVER" is written in "NAVER". BingSu said that was just a typo.

Retrieved from "https://vocaloid.fandom.com/wiki/HIGHER_!?oldid=1073257"
Community content is available under CC-BY-SA unless otherwise noted.