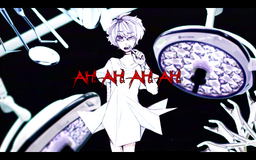 “Technically, when I first started writing the lyrics for this, it was a double-meaning rant about someone (someone irrelevant, you most likely don't know them)? But after recently finishing/redoing like, 90% of the lyrics, since I don't care about that situation anymore, it's hard to say exactly what this song is about! So, hey, this one's open to interpretation.
... Hyperdontia is having extra teeth, or too many teeth. In this song, teeth are metaphors for something unwanted, like bad memories or toxic people. TL;DR, the song is basically about wanting to get rid of those extra, unneeded bad things that make life worse, however going too far to remove them sometimes makes everything worse.”
—author's comment

"HYPERDONTIA" is a song featuring v4 flower by GHOST and Creep-P. It is their first collaboration after a long hiatus.

Retrieved from "https://vocaloid.fandom.com/wiki/HYPERDONTIA?oldid=1090955"
Community content is available under CC-BY-SA unless otherwise noted.