Hachune Miku (はちゅねミク) is recognized as a famous official derivative of Hatsune Miku. The term "Derivative" is used here to describe a fanmade VOCALOID character that is based on an already existing character.

This character was responsible for the start of the Item War system that eventually began, ending with the entry of Tako Luka later on. Despite fan belief, she is not actually holding a leek (riiki, リーキ), but a green/spring onion (negi, or 葱).

Hachune Miku was created by Otomania (video) and Tamago (picture) and established via Hatsune Miku's version of Loituma Girl internet meme, eventually going on to becoming its own character. Hachune Miku is acknowledged as one of the first mascots to gain popularity within the Vocaloid fandom.

She is regarded a silent mascot by the fandom. In music videos and songs that have a singing voice in them, the voice is more of a representation of Hatsune Miku, rather than her actual voice. However, her voice can be heard in the opening of Hatsune Miku -Project DIVA- extend (the version with voices).

Hachune (はちゅね) is a mispronunciation of Hatsune, which shows her childishness and generally silly disposition.

She is often seen in videos as a blank-eyed doll-like figure with a gaping mouth.

Hachune Miku is one of the Vocaloid derivatives that became officially recognized by Crypton Future Media, the publisher of the Character Vocal Series for VOCALOID2. The other derivatives bearing this distinction is Sakine Meiko, Akita Neru, Yowane Haku, Rin no Youchuu, and Tako Luka.

Official licensed Hachune Miku merchandise has been produced, such as Nendoroid Puchi and plush toys, key chains etc. The Hatsune Miku Nendoroid figure that comes with a face representing Hachune, while a limited edition Nendoroid of Hachune was also produced by the Good Smile Company at the Wonfest 2008 Summer fair.

In Maker Hikoushiki Hatsune Mix, Hachune Miku often appears out of nowhere making cameos, upsetting the main characters and generally getting herself into trouble. She appears in chapter 2 and chapter 3.

In the rhythm game, Hatsune Miku -Project DIVA- (series), Hachune Miku has made many a cameo and has also been a playable character in its sequel (end credits and tutorial mode only).[1]

Hachune Miku as appears in the Project Diva videogames

The Katagiri Corporation construction equipment rental company has released road construction barriers featuring an image of Hachune Miku printed on the side elements, albeit with the leek missing. Those barriers sometimes made appearance on the Magical Mirai expo area, but are sometimes seen in the streets, so they are not produced specially for the Magical Mirai event.

Most appearances of the Hachune Miku road barriers, judging from the reports on Twitter, are in the city of Sapporo, where the headquarters of Crypton Future Media is located.

Close-up of the barrier artwork 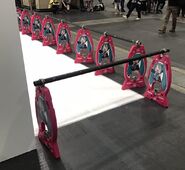