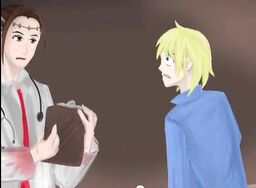 This song tells the story of a Halloween night some time in the future where, because of carelessly-performed magic, evil spirits are set free into the world. The spirits, taking the form of creatures from classic Halloween costumes and wreak havoc on the world, but are sealed away again at dawn. The song ends with a moral, "If you choose to laugh at evil, make sure you think twice".

In October 2014, Koda-P uploaded a 2014 version featuring the same VOCALOIDs, except switching out SONiKA with Sweet ANN. Other English VOCALOIDs, such as Prima, Tonio, OLIVER, AVANNA, and YOHIOloid made a brief cameo as well as the "Crypton 6" (MEIKO, KAITO, Hatsune Miku, Kagamine Rin, Kagamine Len, and Megurine Luka. The 2014 version had improved background music, mixing, tuning, and illustrations, which were drawn by Myst-Saphyr and Crusher-P.

Every thirty-first night of October you would meet
little children dressed as monsters all demanding, "Trick or Treat".
Ever since the night it happened people see through different eyes.
Never take for granted whom you might antagonize.

On the night the world was changed, mankind knew not what lie ahead.
Laughingly, they made a game of trying to command the dead.
Asking questions, seeking answers, thinking that they would prevail.
Careless words they uttered were enough to tear the veil.

One by one, the evil spirits, freed at last from fettered years,
found their way into our world and saw that children had no fears.
Taking great offense at all the joy on such an evil night, they
vowed to put the fear back in our hearts and took to flight.

Hurry, hurry! Run! They're coming! Lock the doors and hide away!
What on Earth is happening? My eyes behold such disarray!
What could have the power to bring such a city to a halt?
Someone phone the SIS and find out who's at fault!

Saints protect me! This must be the End that I've been told about.
Everywhere I look, I'm seeing panic, tragedy, and doubt.
What have I done to deserve this? I've remained a selfless nun. I
fear that we won't live for old Beelzebub has won.

Do you hear the big commotion hap'ning in the street?
Probably some children looking for a house to trick-or-treat.
I don't think so. Look outside. The neighbors are all on the floor.
Look there's someone all dressed up, he's pounding on the door!

Sorry sir; I can not help. This Hospital is over-flowing.
I don't know when we'll have room, but free-space here is growing.
Have a seat. Don't go outside; there's things out there you won't believe. I'm
sorry, but you're safer here, it's best if you don't leave.

All I've heard for hours now are sirens drowning out the screams,
making such an awful noise that pales the terrors in my dreams.
Lying in an ambulance, my vision blurs; I cannot see.
I can feel I'm slipping now. The bell; it tolls for me.

For one night all order left, and chaos caused a hellish strife.
No one could have stopped the madness. Breaking people; ending life.
If it weren't for rules unspoken forcing them to end the war,
Halloween would have gone on until we were no more!

All the spirits left our world as dawn broke on the wasted masses.
Everyone who lives now celebrates when the tenth month passes.
Now that you have heard the story, please remember this advice: ■■

"If you choose to laugh at evil, make sure you think twice!" ■■

Retrieved from "https://vocaloid.fandom.com/wiki/Halloween_Requiem?oldid=974614"
Community content is available under CC-BY-SA unless otherwise noted.